The state of Oaxaca is Mexico’s most diverse area biologically and culturally. In the case of plants, the Institute of Biology of UNAM published a synopsis of the flora, where 321 plant families,  2,160 genera, and 9, 363 species, of which 8,175 are plants with flowers were reported. Of these species, 308 have been introduced from other parts of the world and 658 are endemic, in other words, that they cannot be found in any other part of the world, only in Oaxaca. This mean that out of the 2,382 endemic species registered in Mexico, 25.5% are in Oaxaca (García-Mendoza & Meave, 2011).

The National Commission for the Development of Indigenous Peoples (CDI) recognizes 65 ethnic groups in Mexico, besides the mestizo. The state of Oaxaca has the most cultural diversity of the country, where 18 ethnic groups interact: Mixtec, Zapotec, Triqui, Mixe, Chatino, Chinantec, Huave, Mazatec, Amuzgo, Nahua, Zoque, Chontal, Cuicatec, Ixcatec, Chocholtec, Tacuate, Tztotzil and Afroamericans of the costa chica of Oaxaca, that in total make up over a million inhabitants. According to the Red de Etnoecología y Patrimonio Biocultural of Conacyt (2012), the state of Oaxaca is so culturally rich that in an area of barely 92 thousand square kilometers 157 languages and dialects are spoken.

As a result of the interaction between biological and cultural diversity, Oaxaca also has an impressive richness in agrobiodiversity, as the result of the profound knowledge about the rational use of natural resources and animal and plant domestication in ecosystems of high biological diversity.

In every region inhabited by the distinct human groups that inhabits our country an enormous encyclopedia of knowledge has resulted as a consequence of the observation, experimentation and interpretation of the environment. This knowledge can be witnessed in the domestication of at least a hundred species, a notable agrobiologic diversity, the use of about five thousand plant species with medicinal properties and the use of enthoegen plants and fungi as vehicles for communication in a supernatural space.

This learning process represents what we know as Traditional Knowledge, which shows us that there are many ways of perceiving the world and solving our problems as a biological species.

What is known as the Mazatec Sierra is located in the Sierra Madre del Sur and the Sierra Madre Oriental, with an approximate surface of 2,400 square kilometers, and it is considered as one of the eight regions that make up the state of Oaxaca.

These lands have been inhabited since prehispanic times by the Mazatec people, that within their distribution area present at least five linguistic variants.

According to Boege (1988) the Mazatec participated in social movements, such as the popular armies of the independence, against the French and during the Revolution. During the second half of the twentieth century, the Mazatec region was transformed due to important occurrences that changed the course of history for the Mazatec people. The first, from 1949 to 1955 consisted in the construction of the Miguel Alemán hydroelectric dam, where approximately 20,000 mazatec were stripped away from their lands.

In the mountainous area, in 1955, something else happened; the visit of a wealthy aficionado to the study of mushrooms that had access to a very important aspect of the mazatec culture, in other words, an special approximation to communicate in a supernatural space through the use of hallucinogenic fungi. The publishing of his experience two years later caused an invasion by the western world (hippies, anthropologists, biologists, pharmaceutical companies, etc) in order to get a hold of this jealously guarded ancestral knowledge, and experience this way of supernatural communication, breaking a series of cultural patterns and finally, marketing a sacred activity that, to this day has had strong consequences in the culture, economy and unorganized growth of the main Mazatec town, Huautla de Jiménez (Jacorzynski & Rodríguez, 2015).

This area that reaches around 1,500 meters in height is presently shared by Mazatec, Nahuatl, Mixtec and mestizo people, and is one of the most important preserved areas of the cloud forest, an endangered type of vegetation of disappearing from the country.

It is also the mountain range that captures the water that trickles down to the main rivers that flow into the gulf of Mexico. The mountainous geography of this part of the Sierra Madre Oriental is a challenge for the survival of human beings due to the sinous and steep topography, where the main transportation for people is on foot. The use of animals is fairly nonexistent, and vehicular transportation only exists on the outskirts of towns close to federal highways. The development of agriculture is also quite difficult due to this geography, nonetheless, farmer communities have learned to adapt to these conditions to produce basic products, such as maize, pumpkin, beans, etc. This is the context for the project being developed at present. 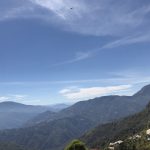 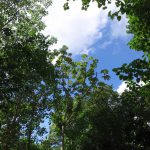 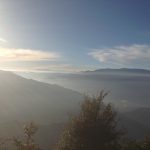