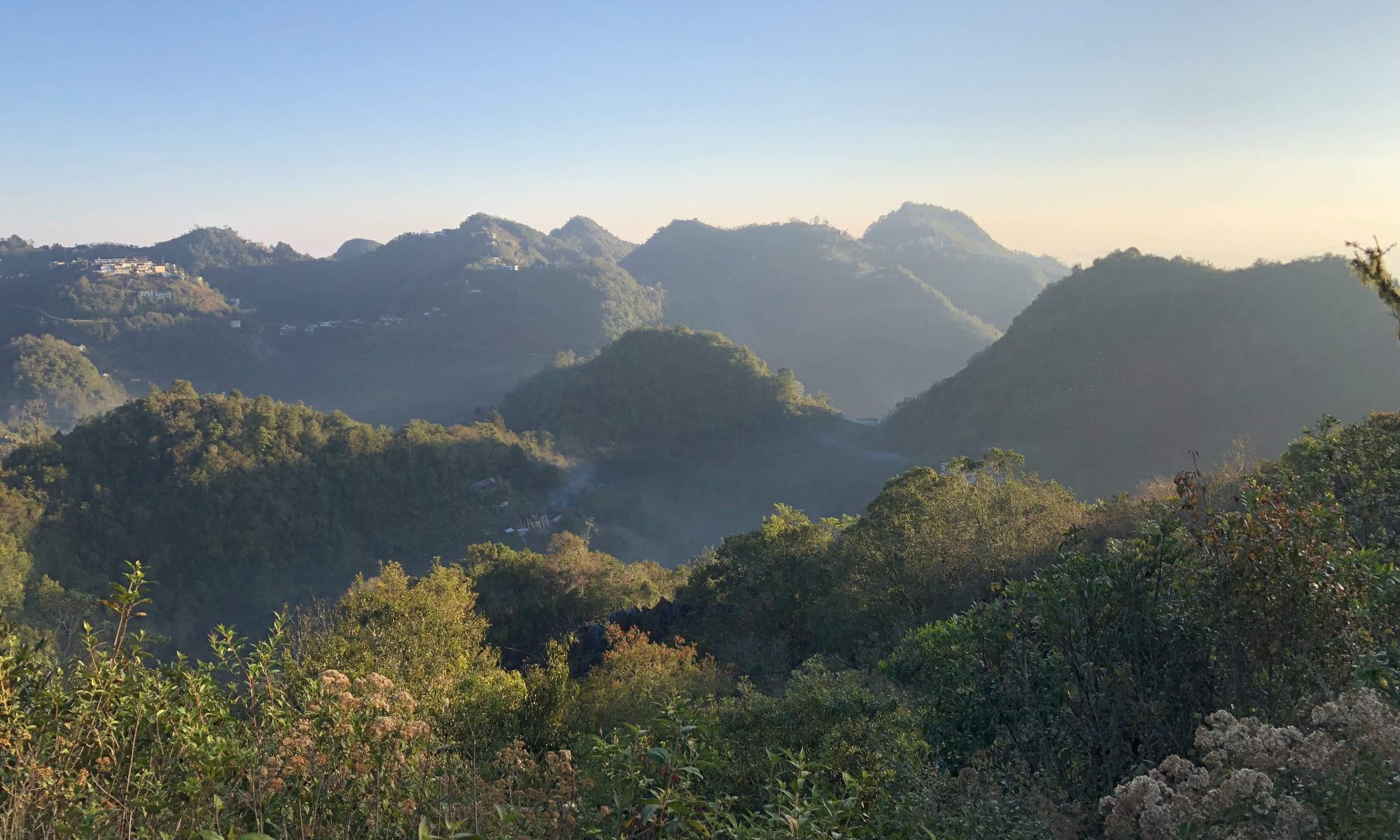 An approximation to the territory

The description and definition of territory is an exercise of immense importance within the co-construction of content concerning the biological and cultural diversity of a specific area.

Possessing knowledge of the territory allows communities to situate themselves geographically, know where their natural recourses are, crops and the distribution of varieties throughout altitude gradients in a mountainous region like the Sierra Madre Oriental.

A simple way to approach the territory consists in the construction of small scale models, understood as an explicit cartographic representation, in order to show the geographical relief differences, locate human settlements, their subsistence activities, distribution of natural resources and communication pathways. 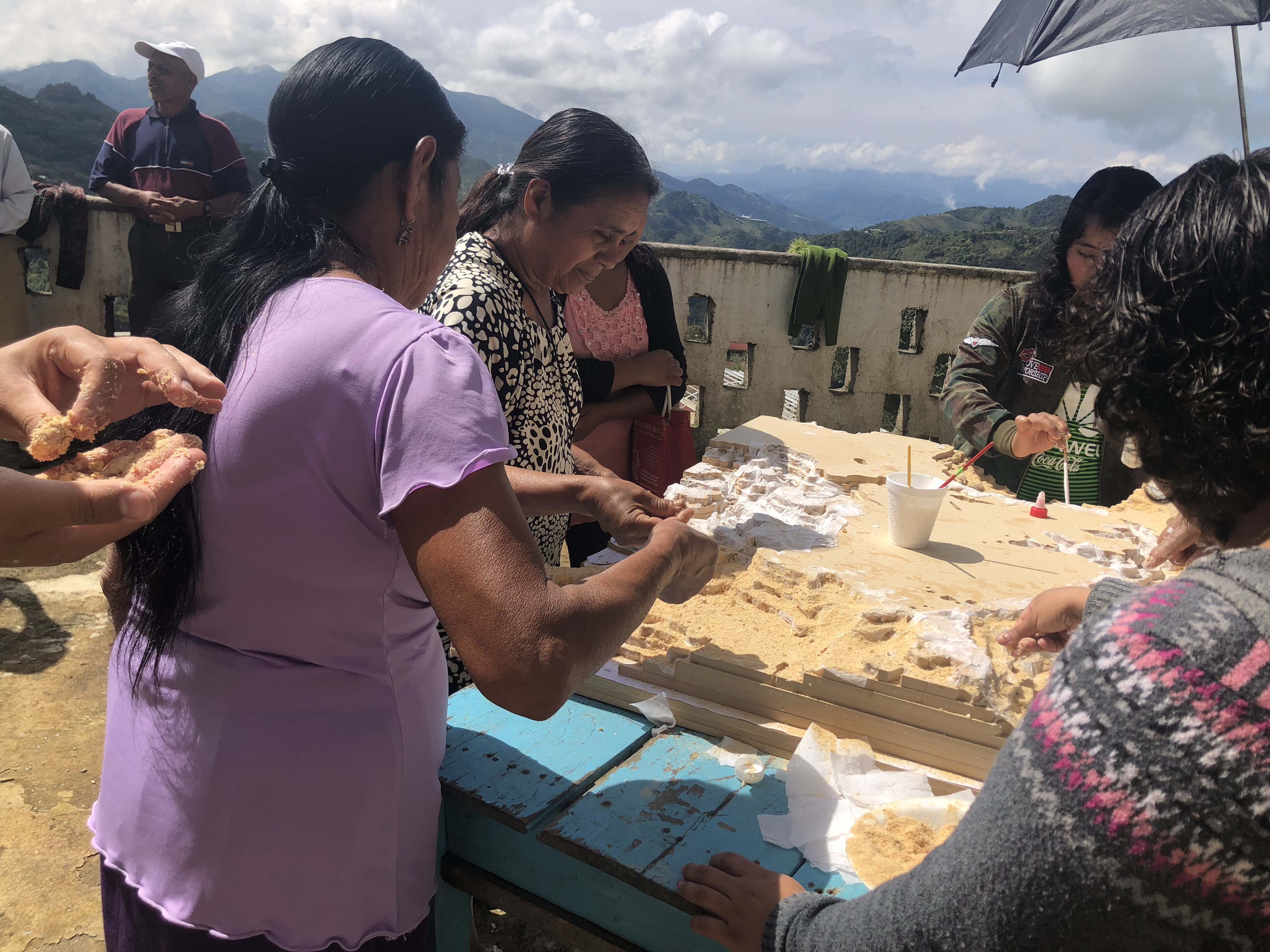 “Small scale models offer a tridimensional perspective of territory, they don’t requiere previous knowledge in order to be understood, and from a visual point of view they are very attractive and useful that promotes dialogue between the members of a community and their authorities about the use and management of territory”

This work is a part of the project “Mazatecs in the twenty-first century”, for the co-construction of digital content related to the biological and cultural diversity of the Sierra Madre Oriental, that we have been developing through the Universidad Veracruzana, along with the group Chjota én níma from Huautla de Jiménez, Oaxaca. Through the network of Sistemas Agroforestales de México we began collaboration with the Drs. Gerardo Alberto Hernández Cendejas and Victor Avila of the Escuela Nacional de Educación Superior (ENES)-Morelia of UNAM, so that they could become acquainted with the area, help us build a series of small scale models, and in a context of participative co-construction, be able to offer the communities of the region a novel approach to the territory where we are presently developing our project.

The work was carried out within the series of fieldwork activities the students of the geo-history program of ENES-Morelia had to execute, where the students could develop their anthropological and geo-historical abilities, in a context of indigenous communities, and through the interaction and development of participative workshops, build the models, so that they could offer participants a concrete vision of the territory they inhabit.

The teacher Evaristo Isauro Nava Martínez and Miriam Rafael Lucas, of the group “Chjota én níma”, of Huautla de Jiménez, Oax., and Nisao Ogata of Universidad Veracruzana were in charge of the introduction to the communities and organization of fieldwork. Preliminary work meetings were organized with the authorities, the necessary protocols were delivered to make the purpose of our presence in the area evident, and consent was obtained from the residents of each community, with who we have been developing our project in the townships of Huautla de Jiménez, Oax., Santa Cruz Acatepec, Oax. and Teopoxco, Oax.

With the participation of ENES-Morelia, UNAM, during the days spanning from August 28th to 31st, work meetings and guided trips in several communities of the previously mentioned townships, to register points of geo-reference and impart a series of participative workshops to co-construct the models. In this exercise, the participation of community members was of primordial importance, so that they could locate themselves on the model, recognized their communities, their plantations and distribution of their crops throughout the different altitude gradients. 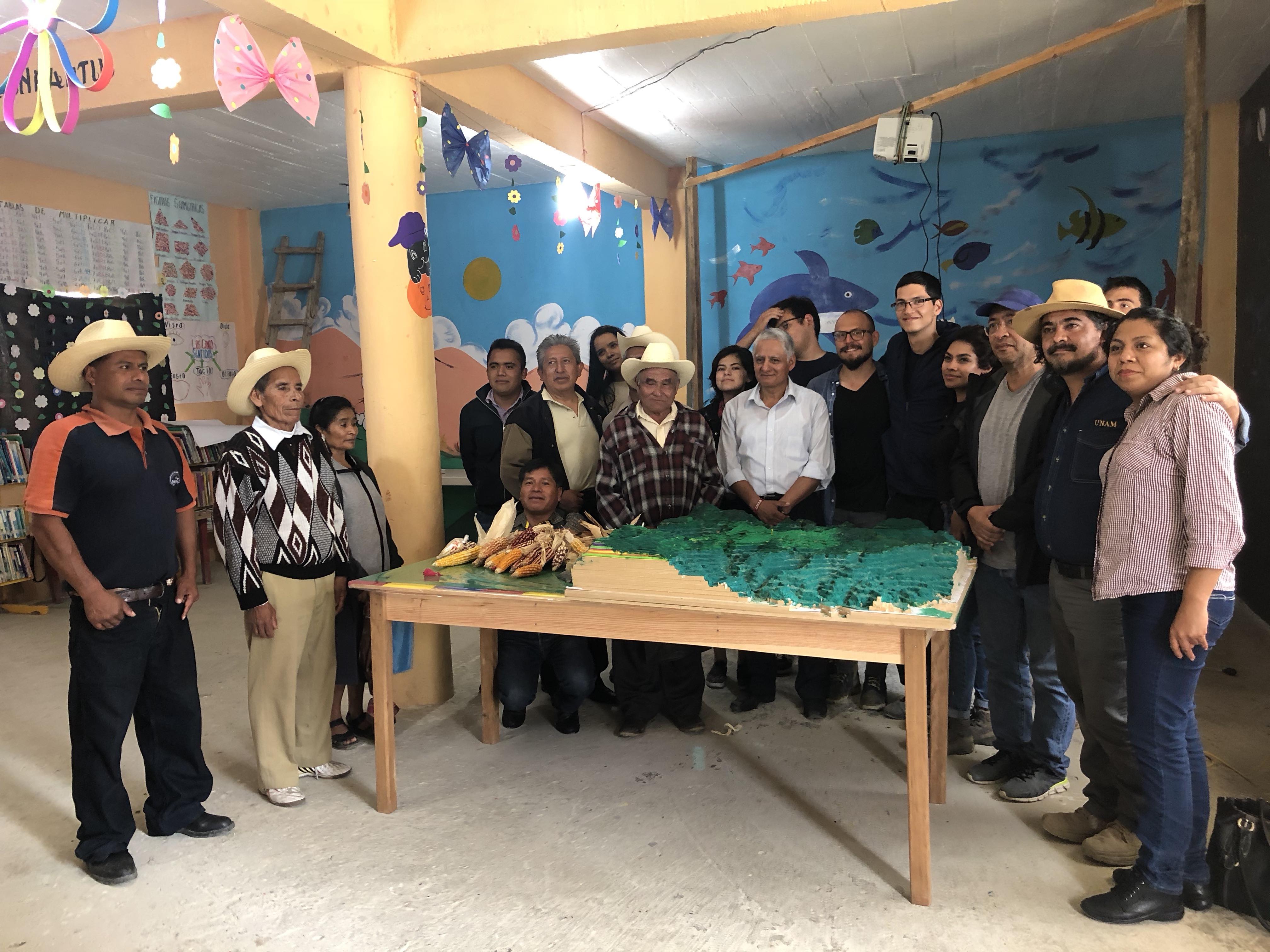 With the participation of the work group and the participative workshops of ENES-Morelia, two small scale models were co-constructed and delivered; one in the township of Huautla de Jiménez, in the municipal agency of San Andrés Hidalgo, under the responsibility of the teacher Rutilio Marco Herrera Quiroga, and another in Santa Cruz Acatepec, to the mayor, Mr. Rigoberto García Pérez.

In the presentation of the small scale model in San Andrés Hidalgo, an interactive exercise was carried out, using multimedia tools to project a series of altitude, relief, distribution and flow of water, geology, types of soil, path and human settlement maps. With this information, a work exercise was done with attendants, were diverse subjects were discussed, such as varieties of maize in the region, their distribution in an altitudinal gradient and the possible influence of climate change in the agricultural activities in the area. The results of this exercise, as well as the distribution of the variation of maize throughout different gradients of altitude shall be published at a later date.

Finally, in San Andrés Hidalgo, the model was installed in the library of the municipal agency and has been available since August 31st, 2018, for the use of any interested person or institution. Due to the request of the municipal agent, Rutilo Marco Herrera Quiroga, the possibility remains of training the person in charge of the library in order to create and educational program where the students of the areas schools may be instructed on the territory and its natural resources with the use of the model.

The model in Santa Cruz Acatepec was left under the responsibility of the mayor, Mr. Rigoberto Pérez García, has become available since the same date, in a provisional area, due to the fact that the municipal palace is under construction.

The next video represents a sample of the work carried out

An approximation to the Mazatec Territory (4K)

An approximation to the Mazatec Territory (Medium)

An approximation to the Mazatec Territory (Small)